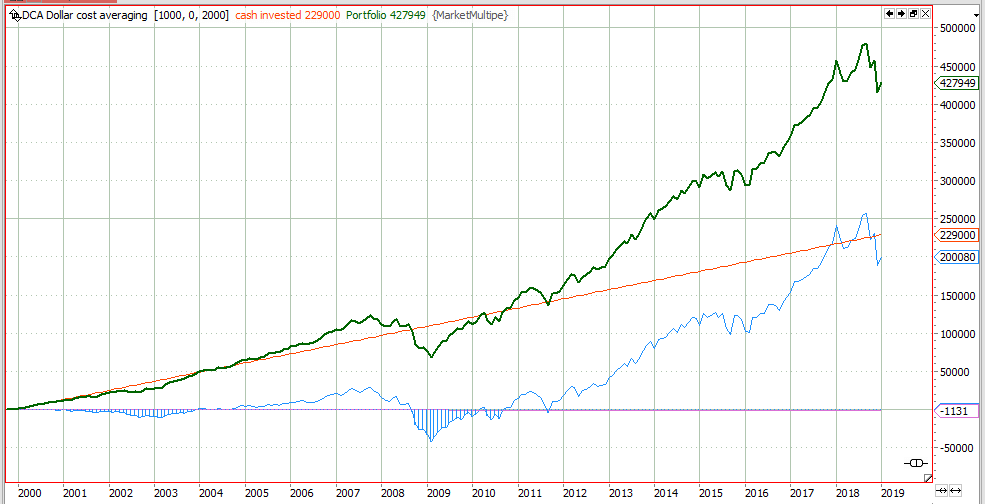 This article is about the dollar cost averaging investment strategy and the influence of luck in it.

To invest parts of your income into financial markets has been a profitable approach, especially in times when bond yields are low. One approach to do so is the dollar cost averaging investment strategy.

DCA is as simple as it can get: At the end of every month you invest a fixed amount of money into a broad index ETF. Over time you will profit from the general bullish trend in stock markets. At least that’s the promise made by many banks to get customers to invest.

As you only buy, this approach is also quite interesting when it comes to taxes. As long as you do not sell there usually is no taxation of the net capital growth of your account. DCA – a lucky strategy over the last 20 years Comparing the dollar cost averaging strategy returns on the first chart to the S&P500 index itself, you see that this nice return of the strategy is mostly due to a big portion of luck.

From 2000 up to 2011 the strategy made nearly no extra money as the S&P moved sideways. It basically was just a savings account, maybe you collected some dividends…

But lucky you, after 2011, when you already had 50% of the money invested, that nice 10-year money printing bull run started. This period of time brought the main positive returns of the strategy. It combined a bullish market with a high percentage of capital invested.

But what if the market would have moved different? Would the DCA strategy still make money? To test this I reversed time and direction of the market. Now S&P starts with a strong bull trend and ends with a sideway market. As you can easily see, in a market scenario like this the dollar cost averaging strategy was not as fruitful as expected. It did not double the amount of money invested as it did with the “real” S&P, but only added a little more than 16.000$ to your savings of 229.000$.

At the beginning, when the market showed a strong bull trend, you only had a little money invested. In the second half of your “investment life” this virtual market moved sideways. In opposite to the first example, now you have the bigger half  of your investments invested in a sideway market. And this kills the performance.

Dollar cost averaging – is it useful or not?

Due to this big influence of luck in the outcome of the strategy it is highly questionable if this is a useful strategy for the next 20 years. In the end it all comes down to your believes about the future. If the bull run continues DCA is a good strategy. If not, DCA will not add any extra money to your savings, it will lose money in a bear market. So by itself DCA is just a gamble on the future but not a sound investment strategy.

factor investing is a better way to structure your portfolio

or do an algorithmic portfolio trading strategy