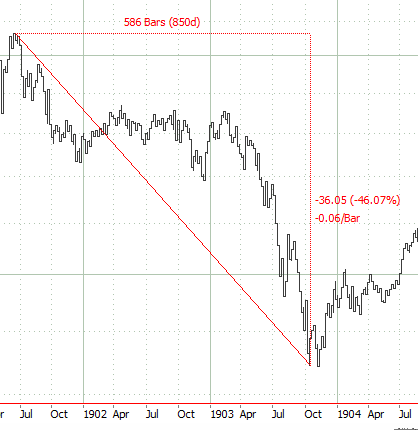 Since S&P500 has lost 20% from its top in 2018 and everybody is talking about bear markets. See what has happened in history.

We all have been spoiled by artificially low volatility over the last years.

Now people blame the gone-wild president or algorithmic trading for the market correction, but let us have a look into history to see how common market corrections have been over the last century.

These corrections and bear markets have been caused by all kind of reasons. Market cornering, world war 1&2, inflation, burst dreams about the future of technology or just criminal speculation by the big banks. No crazy president needed, -20% is just business as usual…

The charts show all major market downturns since 1901. Please note the link underneath each chart, it leads to some explanatory article on the causes of the crash / bear market.

Know the history and be prepared for the future… Financial crisis might be the wrong word for what has happened in 2007. It was a capital crime committed by individuals, using the to big to fail narrative to rob the people. This we must not forget, especially as nothing has changed since then. The neo liberal structure of our economy still has got one main goal; to re-distribute wealth from the 99% to the 1%. Without changing the structure there is no need to point at individual criminals.