Point&Figure charts have been around for more than a 100 years and they are still quite popular, especially with commodities and forex traders. This article will do some statistical analysis of the most basic Point&Figure signal.

Unless bar and candlestick charts, which draw a price marker every day, Point&Figure charts are only updated when the price move since the last update has been bigger than a defined amount. This way Point&Figure charts filter out most of the markets noise and only show the significant price moves.

On the above chart the same data is shown as Point&Figure and line chart.

To learn more on the construction of Point&Figure charts please ask google or get a book like the definite guide to p&f charts.

The basic Point&Figure buy or sell signal occurs, whenever one row reaches the same level as 2 rows ago. 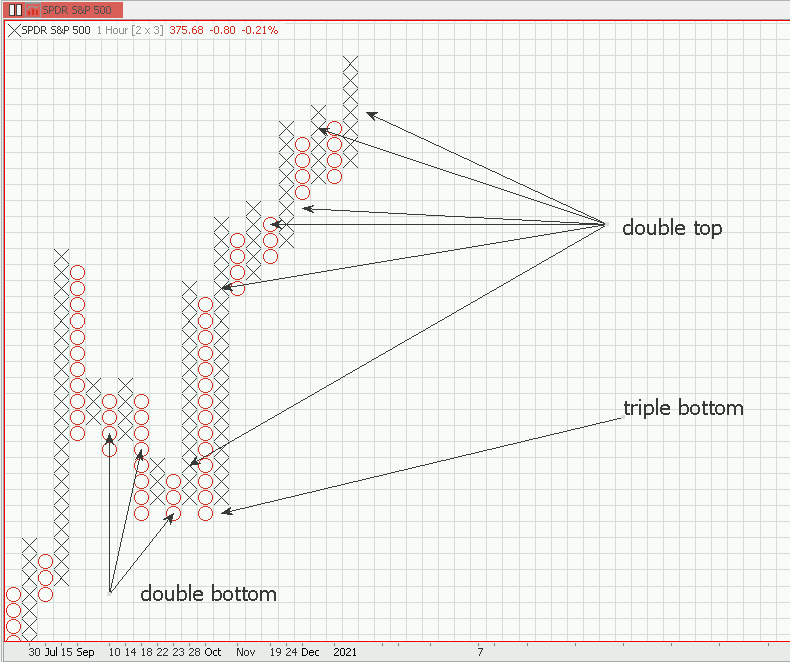 If a rising row marks the same height as the X row before, you call it a double top.  If the market touches the same level several times (see triple bottom on chart), this would be regarded as an even stronger signal.

As the Point&Figure patterns are so easy to describe, it is also easy to run a test on them. I was questioning myself, what probability I got, that after a double top is shown on the chart, the current row of X will rise another 1,2,or 3  boxes.

Here are the results for some markets. You see the probability for reaching at least 1,2,3 additional Xs after a double top in dependence of the box size for one X. Daily SPY data from 1994 to now has been used.

Especially for lager box sizes, the double top formation seems to be a profitable signal. When applying an additional trend filter to this signals, the probabilities can even be better than the ones shown above.

You might say that it is no problem to find a better than 50% long signal in an up-trending market. So lets repeat the test for the EUR-USD Forex data from 1986 until now. EUR has been as high against the dollar in 1986 than it is now, so there is no positive drift looming over the test results.

Seeing the results above there is no wonder why Point&Figure charts are still quite popular among Forex traders.

I will host a 30 minutes webinar on how to use Point&Figure and Renko charts in algorithmic trading next week.  Click for free registration and dates.

2 thoughts on “Statistics of Point&Figure Charts”