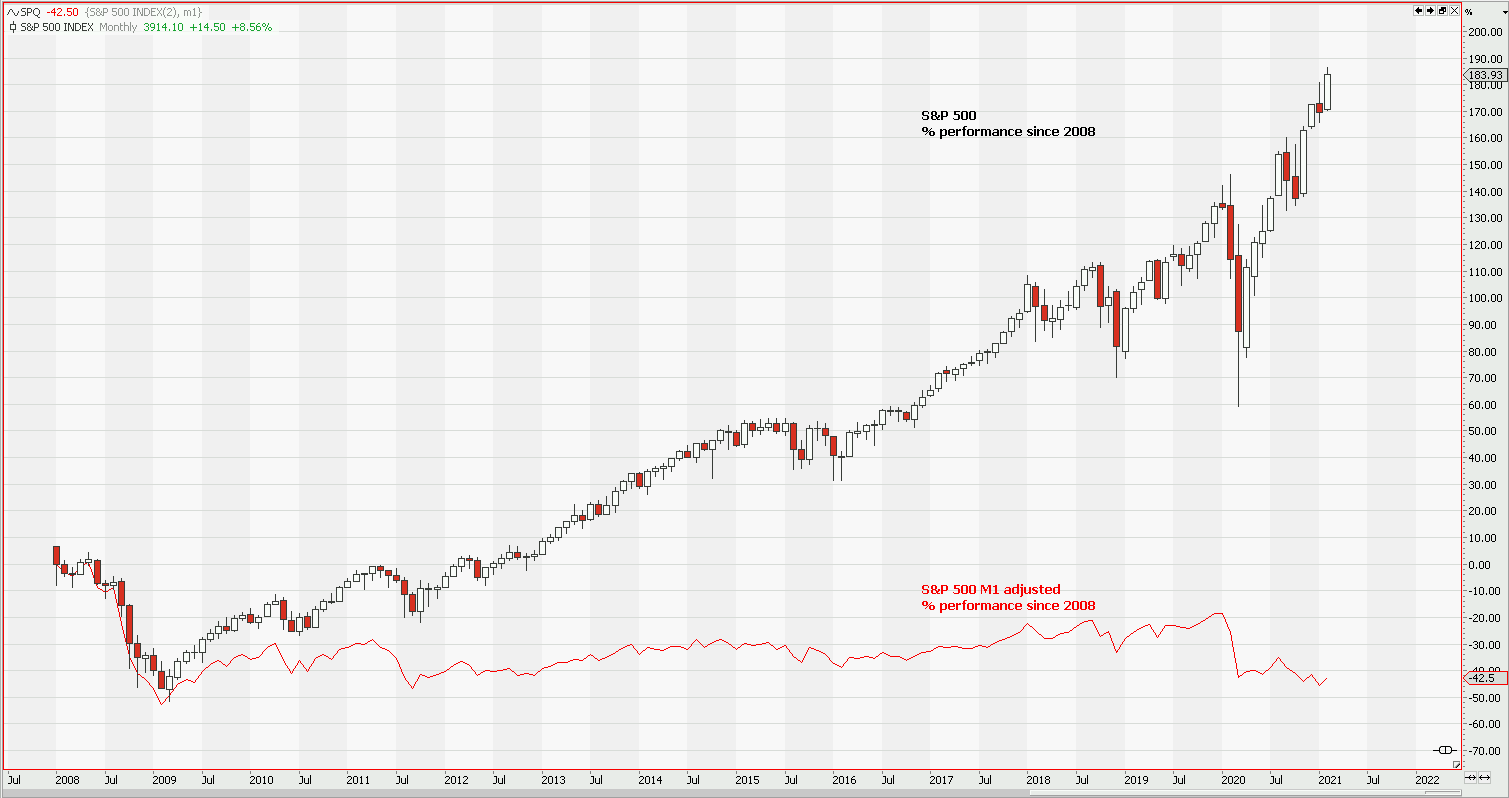 The seemingly unlimited printing of money by central banks has driven markets to unimagined heights. But what does market performance really look like after adjusting for M1 money supply and inflation CPI?

Let’s first have a look at the absolute numbers for consumer price index (for urban consumers) and the US M1 money supply. Luckily there is no direct correlation between those two measures. On this chart an expansion of M1 did not lead to a rising inflation. But there are surely other examples in history. 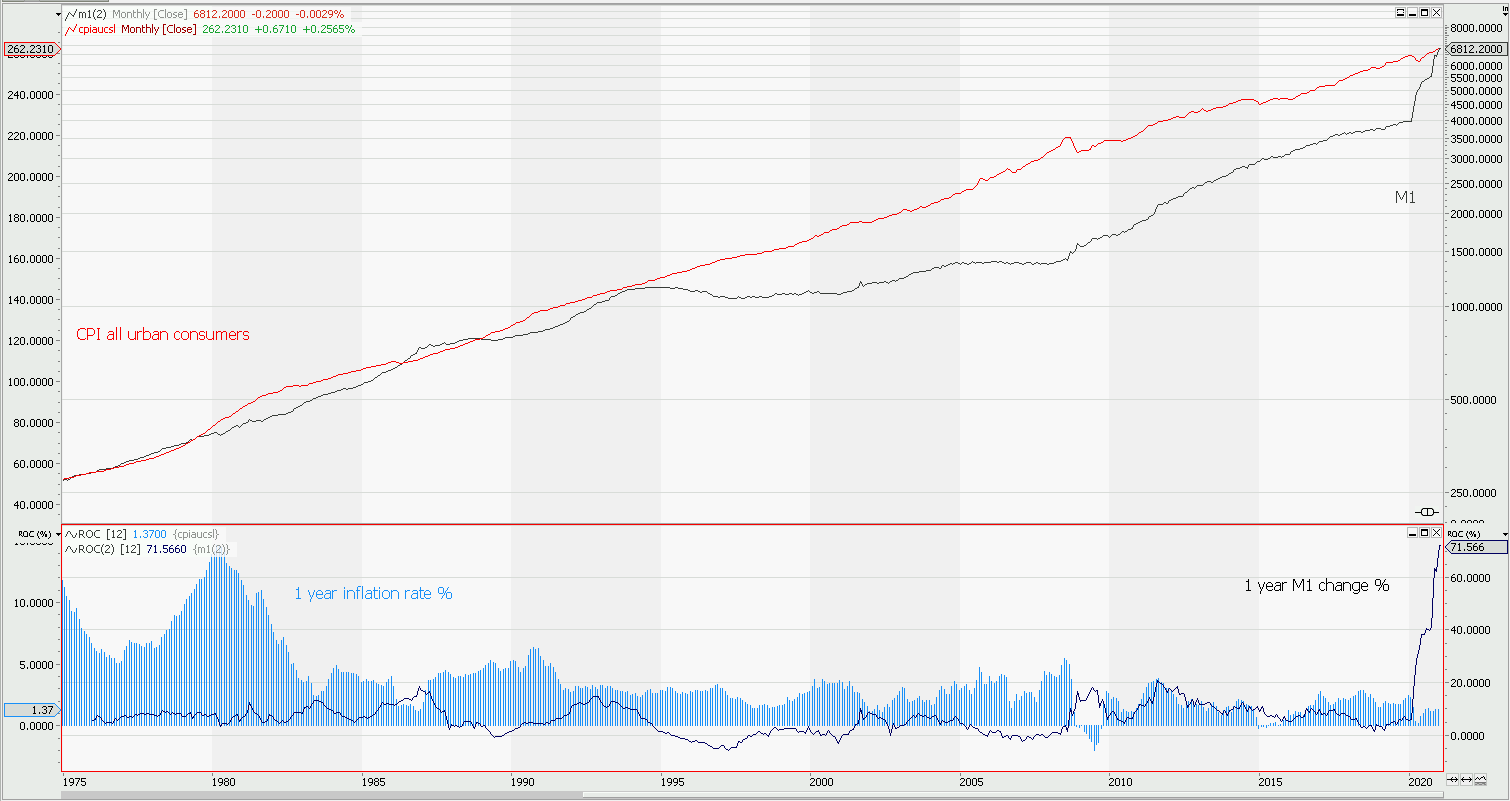 Adjusting the stock market (S&P500) for CPI shows its real growth rate from the point of an average consumer. It is not 45 times higher than 1970, but only 5 times higher. If your investment in 1970 bought you one average consumer basket, it will buy you 5 baskets right now, but not 45, as the nominal value might suggest. 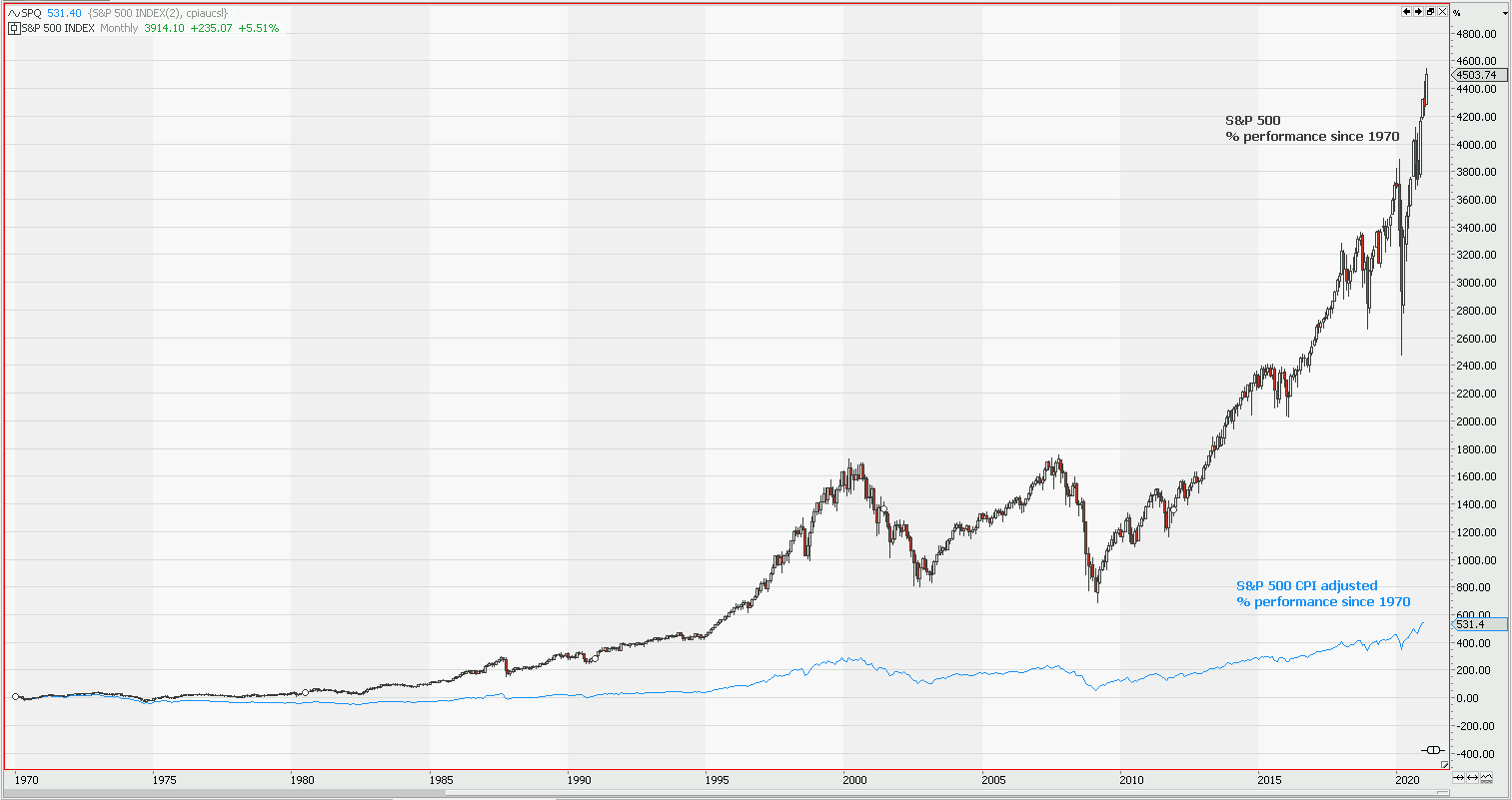 Some rich investors cynically call the basket of goods the CPI calculation is based on the “poor peoples basket”. So let’s adjust the market for the “middle class CPI” – the S&P Case-Shiller home price index. It is based on residential house prices. 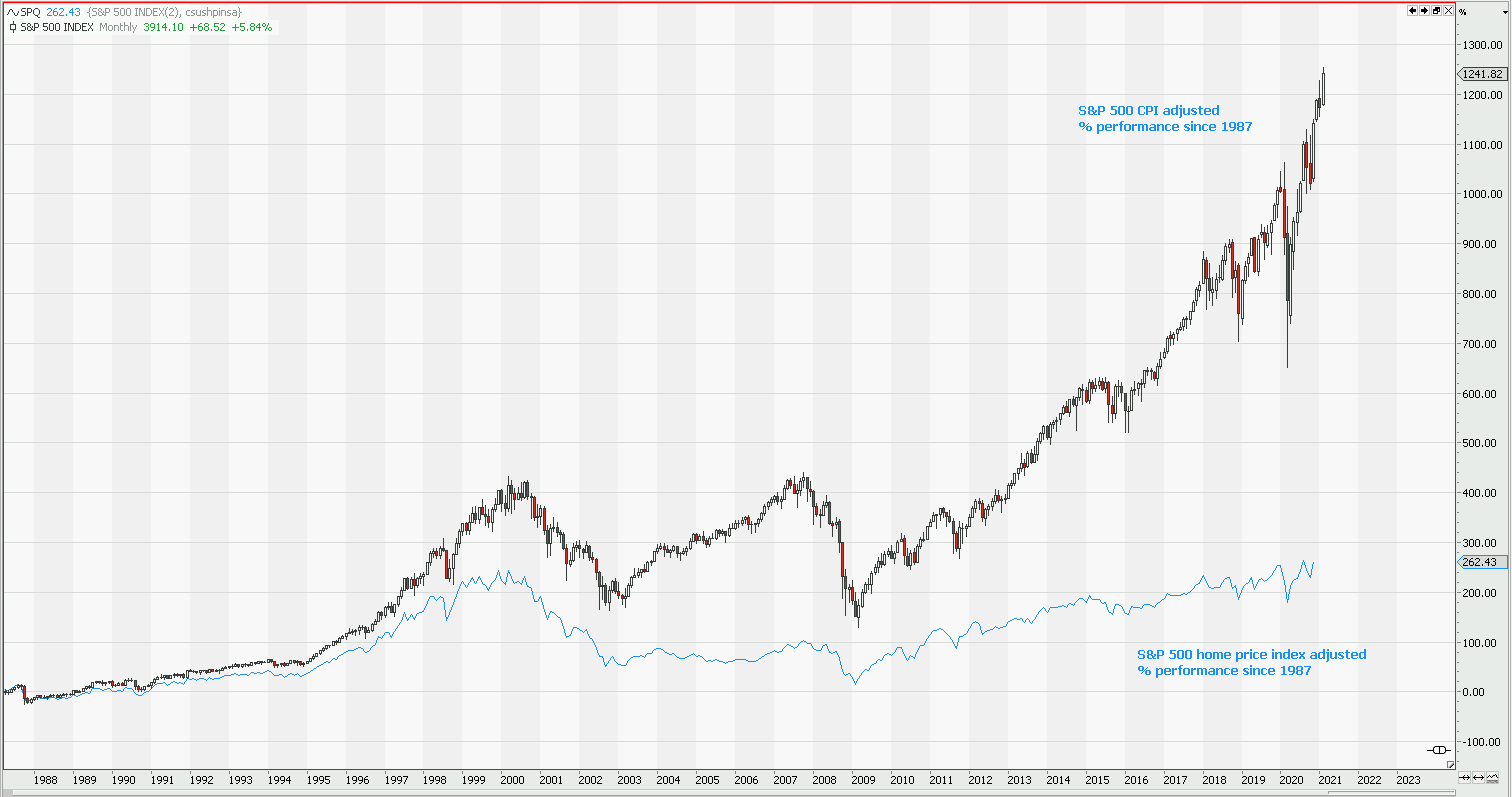 The nominal value of the market should buy you 12 houses now, when you invested the equivalent of one house in 1987. But unfortunately the house prices went up too, so the adjusted calculation shows, that you only can afford 2 and a half houses with the money invested in 1987.

If you invested at the beginning of 2000, the money made on the market would hardly buy you a new swimming pool. 11% up for the adjusted value… 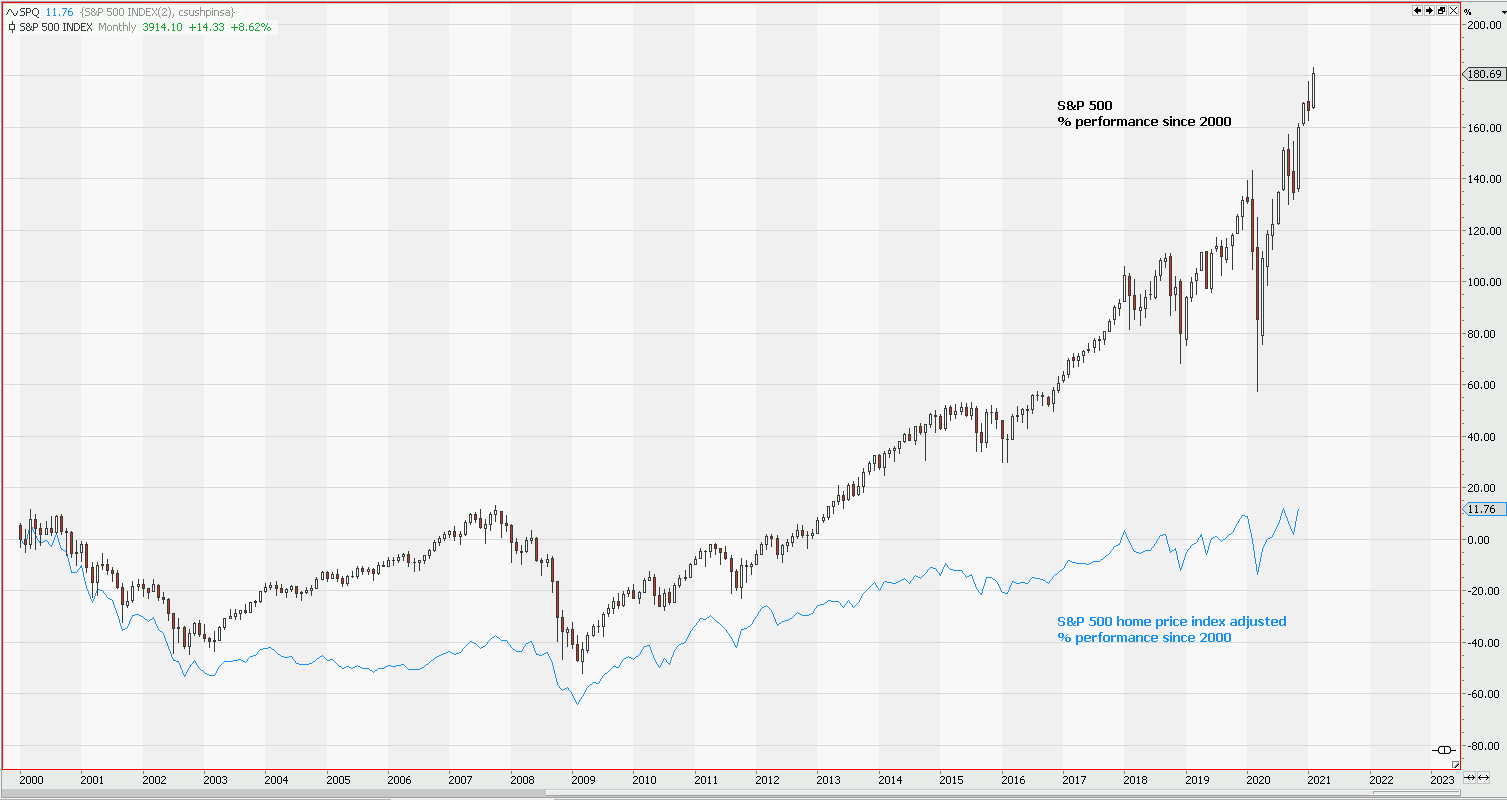 The impact of inflation has been quite dramatic, it ate most of the returns which made you feel rich. Inflation Angst is mostly based on the incredible expansion of money supply. So let’s adjust the market with M1. 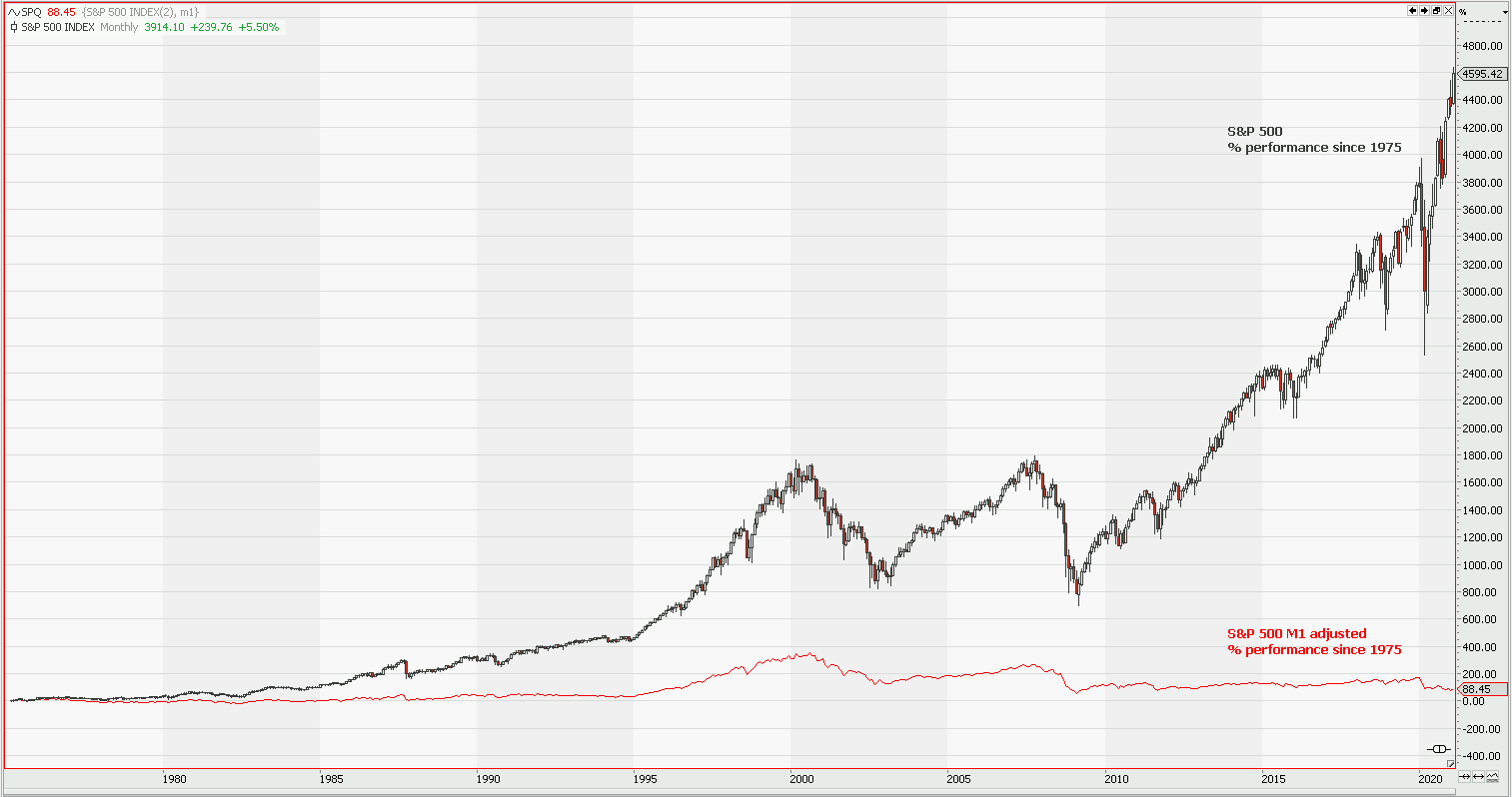 The next chart clearly shows how we printed the market up since the financial crisis in 2008. M1 adjustment does not leave any gains in financial markets. You just have more paper dollar as there have been more paper dollars printed. (which went to stock owners, but not to working class people)

Given the incredible money printing and the expected high inflation, a lot of people think about alternative assets.

Big Elon is one of the most prominent advocates of the idea to put your money not into inflationary dollars but Bitcoin. The Bitcoin algorithm makes this asset a deflationary one. The maximum number of coins is limited, and as people lose their wallets the available number of coins is actually decreasing.  So the more money is put into this market, the more Bitcoin goes up. You need more and more paper dollars to buy a Bitcoin.

Noting the S&P 500 in Bitcoin instead of dollars shows the effects of this: 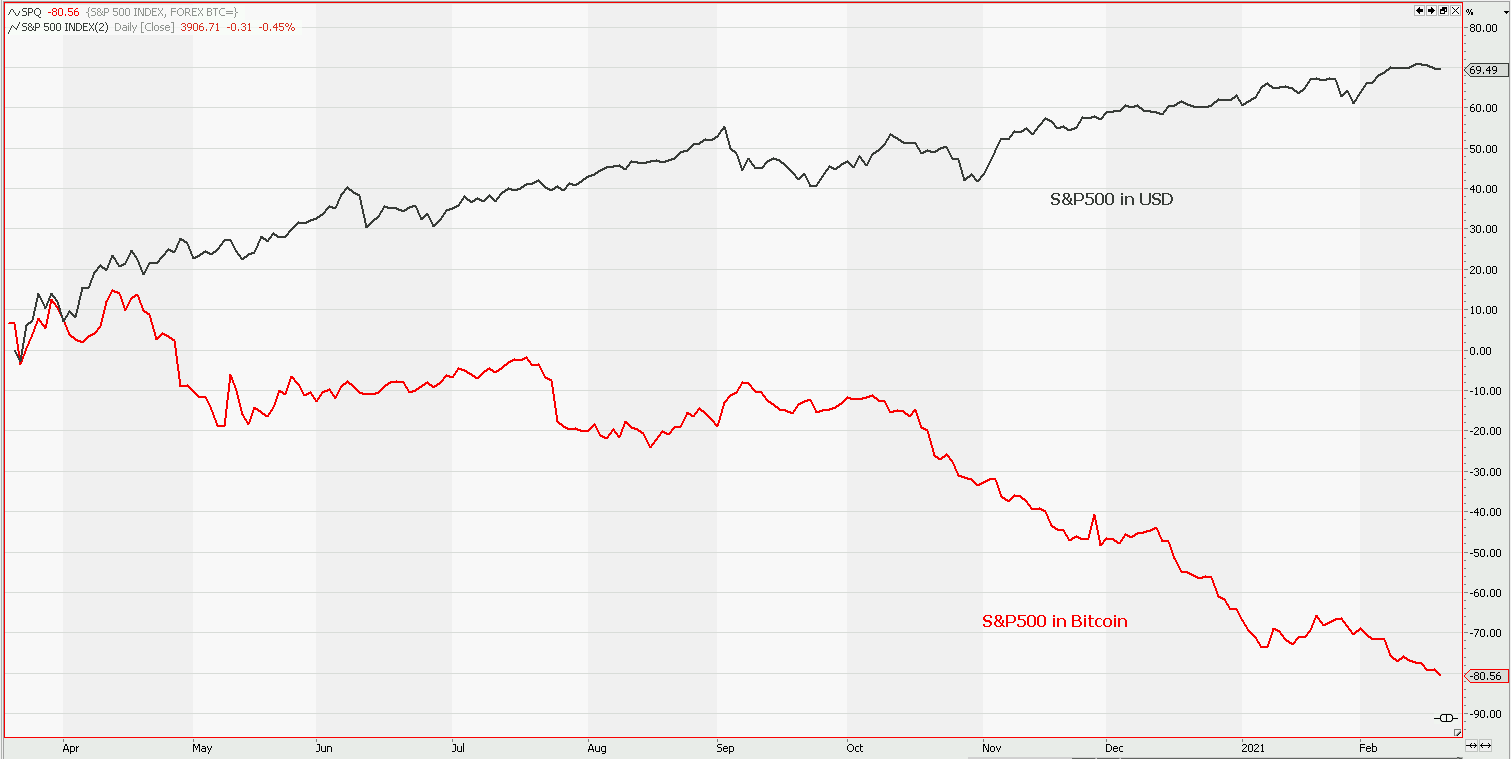 So chose wisely in which market/currency you put your money, and don’t base your expectations on the nominal gains of any market.  Always adjust for CPI or the measure of the product/asset basket your luck depends on.

thanks to FRED and Refinitiv for the data, thanks to Tradesignal for the charting software.

One thought on “S&P adjusted for M1 and CPI”