I don’t know what the future will bring, but there is one thing I know for sure. The bubble has burst and the party is over.

Having a look at my charts and combining their interpretation with the news I get from our political leaders I see the markets drop another 30 to 60% within a short period of time. Let me repeat so you do not think this is a typo: -30% to -60%

First let’s have a look at the German DAX.

The long term support line running via the lows of 2003 and 2008 is about to be broken. This break would happen at about the same levels as the highs in 2000 and 2007. From this break the next significant resistance might be the low of 2011 (positive scenario) or the low of 2008. Both levels would just take out the gains which have been achieved due to central bank money printing. And bursting bubbles usually tend to overshoot resistance levels…

Looking at the Dow Jones Industrial Index shows an even worse picture. The long term trendline coming from 2008 has already been broken, and the next support might be 30% lower at the highs of 2007. Take the next resistance after this very positive scenario, the lows of 2008 and you will see that this is exactly the point where the long term trendline form the 1930’s  is heading. This would be -60%.

The next chart for this article is the NASDAQ Composite Index. And it shows the same picture as the other two markets. Long term support is broken, next resistance levels are -30% and -60% below today’s market levels.

It will not be a one way street to hell, expect some radical rallys in between, but these are the price targets I see on my charts.

You think that I have gone crazy or that I am in panic mode? Myportfolio is down but fine, so business as usual..

Currently we are not in “normal” market mode. That’s what you should have noticed over the past couple of weeks.  Don’t expect a V-bottom and a bull market. We are witnessing a bursting bubble. Markets are efficient and always right. VIX is priced for a 50% move. Do you really think it will be 50% up?

The bubble has been driven by cheap money and our greed, but the bull run has not been founded by real advances in society. Since Alan Greenspan the Markets have lost their sense for risk. Markets down –> chep money –> markets up. This has been the logic for the last 20 years. But this is not the way free markets behave. You have forgotten about risk, the market has not. It is a beast just waiting to get you.

The last significant new technology has been IT and the internet, but these technologies now have been around for more than 20 years. Nothing new. Facebook and making money with advertisements in my opinion hardly qualifies as a game changer. It made some people rich, but left the other 98% with crappy jobs and a feeling of being  hinged. If we get japanified markets I would call this an optimistic scenario for the future.

In case you do not believe in chart reading or my political propaganda then have a look at the fundamental data: 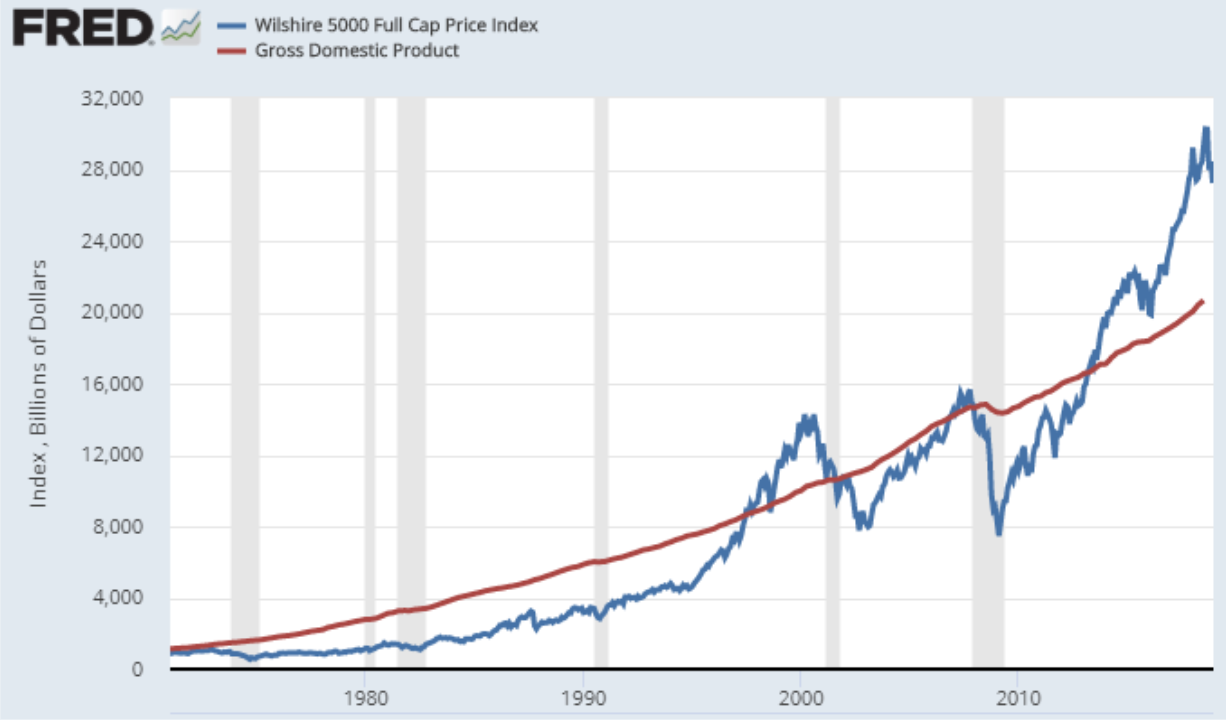 What the future will (need to) bring

The Covid_19 virus is not a killer like the spanish flu has been and I don’t think there is any cause for panicking. But nevertheless it is the pin which burst the bubble. China did a wonderful job in putting complete cities under quarantine. And even the Italians, always known for having a special talent for getting around given rules, are finally doing the right thing. A complete shut down.

USA? A clueless government which tends to pray and hope, but is not taking the needed actions to stop the spreading. Same in the UK.

A complete shut down seems to be the only solution. Stay home, or, unless you have an allowance paper, get shot by police or go to jail. Our grandfathers had to go out and kill in order to survive, would it be asked too much for our generation to stay home for some months?

Italy set an age limit for treatment. If you are too old or have other medical conditions then stay home and die. Cruel? Yes, but it is the only possible solution to safe the ones which have a chance to survive. Shut down now! Stay at home! Stay alive!

I am quite sure that in the end the markets will force a strong and worldwide monetary intervention. Not just a few basis points now and then, but helicopter money, food rations and when the shit is over a globally coordinated approach to rebuild the planet. Pick up the shovels and fix the infrastructure, redistribute the planets wealth to the people and say goodby to liberal “survival of the fittest and no limit to individual growth” societies.

But until then, get prepared and stay home. At least that’s what I will do. Stay home, read a book, use the time to learn some new skills and trade my options, staying mostly delta neutral and following the mechanical rules which served me fine over the last years.

Warning: Chart reading is a very subjective art (you always see what you wish for), that’s why I try to keep my portfolio mostly delta neutral and delta hedged.

Thanks to TradeSignal for the charting software, thanks to Refinitiv for the data. Thanks to LaidBack for the great song.